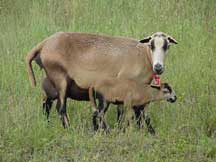 Barbados Blackbelly hair sheep evolved under low-input management conditions, in a tropical environment stressful to animals. Their growth rates are generally lower than those of traditional wool breeds in the U.S., and this performance must be viewed in the context of the nutritional and production conditions under which they were developed. In their native Caribbean environment, diets are based on tropical forages low in quality, with a high fiber component, and limited in crude protein. Supplements are not widely used due to the need for import at high cost.

In the U.S., these animals are generally raised under somewhat improved conditions, but their production niche very likely remains the production of lamb under forage-based systems. At the Agricultural Research Station at Virginia State University, Barbados Blackbelly lambs have been used in a number of hay-based pen feeding, as well as pasture grazing trials. These trials were conducted to evaluate the performance of the Barbados Blackbelly lambs with that of other hair sheep breeds (St. Croix, Katahdin) and/or land race meat goat breeds (Spanish, Myotonic, Boer cross). Lambs used in these trials were produced under an 8-month accelerated lambing system, and assigned to trials after weaning at 9 weeks of age. The accelerated mating resulted in trials being conducted at different times of the year. The following is a brief summary of the experimental conditions and resulting performance data in several of these trials:

In winter of 2000, a pen feeding trial was conducted with 36 male hair sheep lambs and meat goat kids of the breed types mentioned above. The breeds were equally balanced (18 animals per species; 6 animals per breed) and half of the animals in each breed were castrated prior to the start of the experiment. Animals were allocated to 6 pens (3 pens with sheep and 3 pens with goats). Animals were fed free choice a moderate quality grass hay (11.3% crude protein) and received a corn/whole cottonseed/soybean meal supplement at 2% of body weight. At the beginning of the trial animals were dewormed with Levamisole, but depressed performance suggested that the deworming had been ineffective and was repeated with Cydectin 49 days into the trial. Hay intake was higher in the hair sheep than the goats (2.08 vs 1.65% of body weight) in the first 100 days of the trial, but declined thereafter, and was not different between species (1.58%) for the remainder of the 160 day trial. Hair sheep also had a higher growth rate than goats (0.21 vs. 0.14 lb/day). Within the hair sheep breeds Barbados Blackbelly achieved gains of 0.17 lb/day, which was statistically similar to St. Croix (0.19 lb/day), but significantly lower than Katahdin (0.28 lb/day). Castration had no effect on the growth rate of animals in this trial.

The trial was repeated in the spring of 2002, with a similar experimental design (36 animals of the same breeds, supplemented at 2% BW, fed for 163 days). However, all animals in this trial remained intact and crude protein content of the grass hay was slightly lower (10.6%). Again, hay intake was higher in hair sheep than goats (1.49 vs 1.36% of body weight for the duration of the trial), and declined in both species as the trial progressed. Similar to the first experiment, hair sheep again grew faster than goats (0.32 vs 0.24 lb/day), and daily gain in Barbados Blackbelly (0.27 lb/day) was statistically similar to St. Croix (0.31 lb/day), but both were lower than Katahdin (0.38 lb/day). At the end of the trial animals were graded by two state-approved livestock graders. Hair sheep graded higher than goats, and within hair sheep breeds Katahdin graded higher than Barbados Blackbelly and St. Croix.

In a third pen feeding trial, conducted in the late summer 2002, the effect of forage (hay) quality on the performance of these same species/breeds was evaluated. The trial used a total of 72 intact males (36 lambs and 36 kids), allocated to 8 pens mixed by species and breed. Four pens each either received free choice fescue hay (13.5% crude protein) or alfalfa hay (16.3% crude protein). Hay for all groups was supplemented with a corn/whole cottonseed/soybean meal supplement at 2% of body weight. Animals were on trial for 98 days. Alfalfa intake was initially higher (2.44 vs 2.06% of body weight), but decreased as the trial progressed and was similar for the two forage types towards the end of the trial (1.51 vs 1.54%). As was observed earlier, hair sheep grew faster (0.36 vs 0.23 lb/day) and graded higher than goats. Also as expected, animals on alfalfa grew faster than animals on fescue hay (0.34 vs 0.26 lb/day), and this response was consistent for both species. In this experiment there was no difference between hair sheep breeds in daily gain. On alfalfa, Barbados Blackbelly, Katahdin, St. Croix gained 0.38, 0.40, and 0.43 lb/day, whereas on fescue hay the breeds gained 0.32, 0.35, and 0.30 lb/day, respectively. The response in gain to the improved forage was most pronounced in the St. Croix and least in the Katahdin, with Barbados Blackbelly intermediate. Sheep receiving alfalfa tended to grade higher than those receiving grass hay, and live grades of Barbados Blackbelly and Katahdin were similar and higher than those for St. Croix.

In May 2001 a feeding trial was conducted with 36 ewe and wether lambs equally allocated to either a pasture or pen group. Pasture animals were maintained as one group on a 4 acre, predominantly fescue pasture (12-17% crude protein throughout the grazing season), subdivided for rotational grazing. Pen animals were allocated to 6 pens (separated by sex) and fed free choice alfalfa hay (16.6% crude protein). Both groups also received a corn/soybean meal supplement (16.5% crude protein) at 0.75% of body weight, and were dewormed (Cydectin) immediately prior to the onset of the trial. Animals remained on trial throughout the grazing season (168 days). Daily gain was higher in pen (0.17 lb/day) than in pasture animals (0.15 lb/day), and in this trial daily gain was lower in Barbados Blackbelly (0.12 lb/day) than Katahdin (0.19 lb/day) and St. Croix (0.17/day), which were not statistically different.

There was considerable variation in growth rates between the three breeds as well as between different trials. The generally low growth rates in the first trial were likely the result of the presence of clinical levels of gastrointestinal parasitism. While Katahdin generally grew faster, results from the third pen feeding trial indicated that both Barbados Blackbelly and St. Croix responded well to improvements in nutritional management (improved forage quality). The growth rates in the fourth trial were lower than was expected, considering that a good quality forage base was provided both on pasture and in the pens. This may point to the need to provide higher levels of supplementation for these animals if growth rates in excess of 0.2 lb/day are desired.