(You will enter the Members-Only area and will be prompted to log in.)

We suggest you work through a few quick examples to get a better understanding of how to use the calculator. Click the link below to view them.

Before we discuss COI, let’s review how genes work. A gene is a strand of DNA that exists in every cell of a living organism. When two sheep breed, each sheep contributes equally to the genetic makeup of its offspring. For example, a ewe will contribute a gene for a dark brown coat and a ram will contribute a gene for a light hair coat and the interaction of those two genes will determine the hair coat of their lamb. If the ewe and ram share a common ancestor (for example the same grandfather), there is a chance (a mathematical probability) that the ewe and ram will each be passing to their offspring the identical hair color gene that they got from their common grandfather. 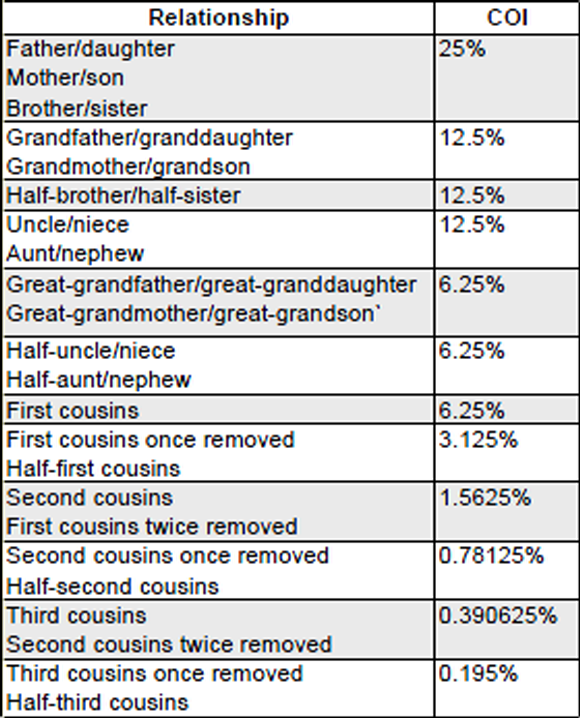 Usually, breeders want to select sheep for breeding that have a low COI to prevent harmful genes from being expressed. But sometimes, especially in the case of rare breed conservation, breeders may purposely breed related animals, called linebreeding, to increase the genetic contribution of the shared bloodline. Another reason for inbreeding is to increase the “sameness” or homogeneity of lambs, for example to reduce unwanted color variation.

You can use the new Pedigree Analysis function to predict the COI of lambs that would be produced if you mated two specific sheep. If you want to look deeper, you might examine the various reports for each of your breeding animals to find out which (if any) sheep are most common in their pedigrees. You might want to avoid using descendants of those common animals where feasible in order to broaden the genetics of your flock.

To learn more about coefficient of inbreeding, see https://scratchcradle.wordpress.com/2012/09/16/gms12-inbreeding-coefficients/ Although written about chickens, this is an excellent article to understand why COI is important, and it provides good examples.